Today i replaced the 36mm extension tube for a 12mm one and a flash for the LED ring light. The flash i use is a Yongnuo speedlite YN560 , a relatively cheap flash that works really good. On the Fuji i use it in manual mode whereby you can sett the strength relatively easy. You can also manually zoom it if you want, I put it in the widest setting and pointed it up and attache a peace of A4 paper as a reflector. I need to do this because I want to shoot close to the front of the lens and the flash can  not be pointed that low. But reflecting the light via a peace of white paper also disperse the light more and can crate the effect of a sunny overcast. 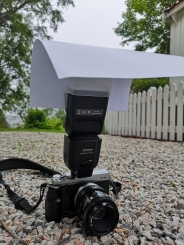 The shutter was set to 1/250s because i like to shoot without tripod and with the 50mm lens you don’t have to worry to mush. I like to use the view finder and push it against my eye to stabilize the camera even more, your eyes is then like a third arm. If I use the back screen i I like to use the strep from the camera that hangs around my neck as a stabilizer by stretching my arms and put tension on it. I played a little withe the aperture settings, I used settings between 1.8 and 5.6 and I also changed the strength of the flash, most of the time the flash was at its weakest (1∕128) setting.

With the 12mm extension tube I had  more distance between the camera and the subject compared to the 36mm. Focusing had also more effect, as I expected. This is handy because there were several flowers that didn’t fit in the frame when focusing as close as possible, by changing the focus I could backup and fill the frame. With the 36mm ring that was hardly possible.

I like the effect of the flash reflected by the peace of paper. Its nice that it comes from above and if you stop down and give more flash light the background turns darker without harsh shadows in your subject. It is possible to stop down even more but the downside is that you have to increase the strength of the flash (or raise the ISO value) introducing a harsher effect with a pitch black background.

All these pictures are lightly edited in Lightroom