Today it was rainy and windy outside so I decided to take some pictures inside with my new bellow. I took pictures of all kinds of objects and small plants and flowers so I could try out different setups. I noticed that it is much easier to move the subject around than  the whole camera when you magnify it at almost 3 times. Moving it forwards or backwards to get it into focus goes great and moving it from side to side to compose the picture is easy to,  now I have to find a way to adjust the height smoothly because that is not so easy.

I also wanted to do some photo stacking in Photoshop and for that I used a 2 way focus rails that I bought on E-bay. I bought it a couple of years ago to try it out, it costs around 10 US Dollars and with my macro lenses it worked OK. But now I see why this is cheap, when you magnify  so much as I do now every little movement is enormous when you look through the view finder. When I use the little nob to adjust the rails it twist the glider a little bit, this happens because the tolerances are not that great. It’s not a big problem but when you want to stack the photo’s later it helps if they stayed lined up. If I want to get serious with this I have to invest in a better one and try to find a good one that goes 6 way’s to solve the problem of the height adjustment.

For the photo stacking itself  used Photoshop. I first removed all the dust spots in lightroom and moved the 6 photo’s as layers to Photoshop. I did some fine adjustment after that but not much. The result is not bad for bacillary 1980s equipment and some modern trickery. The flower was maybe 4mm wide but at f11 and almost 3 times magnification only the stem was in focus. There is more in focus but it looks like there are parts out of focus on the same “plane” as other parts are in focus. This has probably to do with the way Photoshop decided which parts to mask on the different photo’s. If I would do this process manually I might get a better result but it’s a lot of work. The other way I can improve the final result is to pay better attention to the angels I take the pictures and that I take enough pictures and get every part of the flower in focus at least once. But I have to practice for this. I only did it a couple of times some years ago. 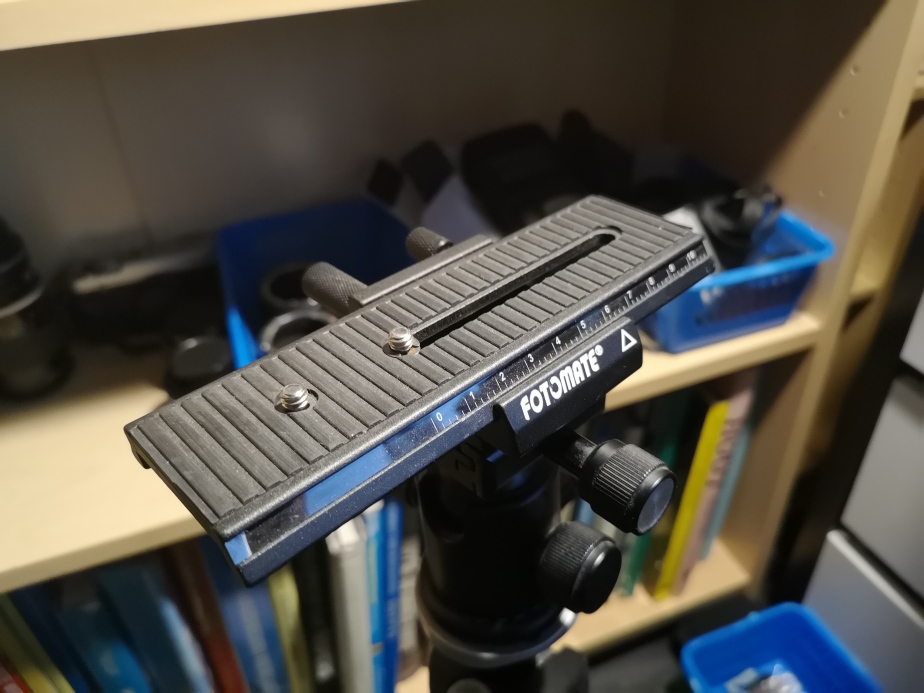